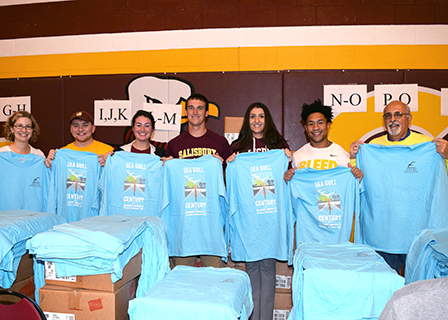 Cyclists enjoyed mild October temperatures for Salisbury University’s 29th Sea Gull Century bike ride! Over 5,000 signed up to participate, ranging in age from 11-89 and coming from 39 states and Canada. The Century has an estimated impact of some $7 million annually and is Wicomico County’s largest one-day tourism activity, with riders staying, dining and shopping across the Lower Eastern Shore.

Among this year’s participants were a returning cyclist celebrating his 82nd birthday with his son and grandson; a Boy Scout troop; and a U.S. Air Force lieutenant colonel who, 10 years ago, rode his own “SGC East” in Baghdad while deployed. Many non-profits also were represented at the ride, including Women Supporting Women; the Cystic Fibrosis Foundation; the Kennedy Krieger Institute with a team of hand cyclists; Athletes Serving Athletes, supporting a local high school student; and a group from the ALS Association.

Sea Gull Century organizers look forward to again distributing proceeds to community organizations, including many that assisted, as well as through student scholarships.