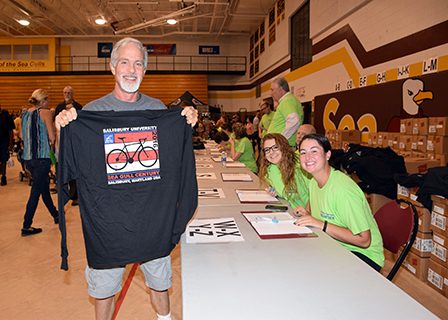 Despite some rain, route modifications for flooding and the potential threat of a hurricane for the second year in a row, Salisbury University’s 28th Sea Gull Century bike ride was a success! Some 7,000 cyclists signed up to participate, with many rolling over their registrations from the canceled ride in 2015. Salisbury Mayor Jake Day told 47ABC: “This is a tremendous, tremendous economic development event for our community.” The Century has an estimated impact of $2.5 million annually and is Wicomico County’s largest one-day tourism activity, with riders staying, dining and shopping across the Lower Eastern Shore.

Among this year’s participants were Team Kennedy Krieger, which included several hand-cyclists, as well as groups with Athletes Supporting Athletes and the ALS Association. A team of family and friends also rode to memorialize the life of SU alumnus Rob Schultheis, who was killed while running last fall. They raised over $10,000 for an SU Alumni Association scholarship in his memory, and his Sysco colleagues helped staff the popular Assateague Island rest stop. Cyclists from 36 states participated in the Century, including one from Vancouver, WA. His father, Bernie Murphy of Delmar, said: “The simple rhythm of the tires on the road, the lull of wind in my ears, the sun or rain on my face all help me clear my mind. I love it.”