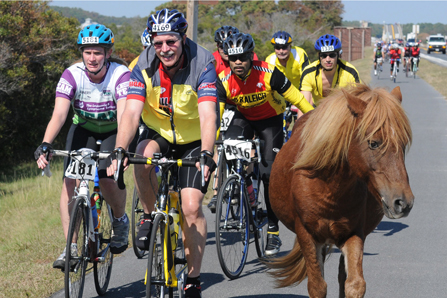 Some 6,400 riders from as far away as Egypt, Puerto Rico and the Virgin Islands celebrated the 20th anniversary ride of Salisbury University’s Sea Gull Century. Perfect weather drew riders from ages 8-82, including Claire Williams of SU’s Social Work Department, who has participated in all 20 rides. Williams’ ride jersey for the day, saluting the U.S. Air Force, had special meaning for two past Century riders: Her son, who served as her stoker in his younger years, is scheduled for deployment to Iraq with the Air Force just 10 days after the Century. Meanwhile, U.S.A.F. Lt. Col. Mike “Starbaby” Pietrucha, returned to ride in his second Sea Gull Century during the 20th anniversary ride just one week back from deployment in Afghanistan. Pietrucha became a Century celebrity last year when, unable to make the ride due to his deployment in Iraq, he invented his own through Baghdad’s Victory Base Camp.

Cyclists recorded their memories of past rides at a special booth set up for the occasion in Maggs Gym. While many recalled the Century’s many joys—like seeing wild ponies at Assateague Island—others like 64-year-old rider Andrew Chronister reminisced about milestones. Riding in his 10th century this year, Chronister averaged 17 m.p.h. and reached his 1,000th Sea Gull mile. Still others, like the U.S. Naval Academy’s Cycling Club, riding in the event for the first time, made new memories. Senior Midshipman Charles Kreuzberger said the team enjoyed meeting “some wonderful new people that enjoy the same sport we do.”